Since it’s Halloween today, my sweet tooth is going and I have a load of horror movies to watch tonight. So I thought for a post today, I’d do a top 10 list for the best horror characters. They range from mostly films, literature and television, the best mediums for all things that go bump in the night. 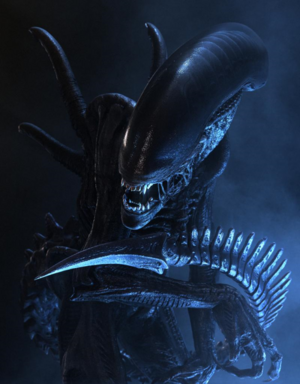 Ridley Scott’s perfect organism literally burst onto the scene back in 1979, but at John Hurt’s character’s expense was the audience’s gain. Elegant in its appearance, the Alien preyed on its victims like lions watching gazelles, faster, stronger, and deadlier than the humans who tried to fight it.

What makes it disturbing is the fact that it’s worshipped by some of the androids in the series, such as Ash and David for its purity. Unclouded by conscience, remorse or delusions of morality, the Xenomorph is a being that doesn’t quite live up to the religious allegory Scott attempts to create, but is still elegantly terrifying enough in its own right.

If you’re going up against this thing where no one can hear you scream, you’d better bring Sigourney Weaver with you.

Now this is an underrated movie monster.

Harking back to German expressionism, the Babadook is a chilling creation which embodies the potential that grief and loss has to cause pain. Essie Davis’ character hasn’t had the chance to grieve her husband’s death thanks to her duties as a mother, which results in a growing terror that threatens to push her over the edge.

Blurring the lines between psychotic breakdown and demonic possession, the Babadook is a being that cannot be destroyed, as grief is a part of human nature. Its strong human metaphors make this supernatural entity all the more unsettling.

A character with the power to hurt and horrify, Carrie White is an innocent teenager who is a victim of bullying both in and out of her school. Her psychic powers are fuelled by the mistreatment she faces, and when she is covered in pig’s blood at her school prom, well you know what happens next.

For me, what takes Carrie White further is how she is treated after the prom disaster. Experts researching into telekinesis see her as a laboratory specimen than a human being, picking her physiology apart to explain her powers. Her legacy is a grim one that casts a shadow over her home town, and encourages sympathy from the reader.

A boy born with a dark curse that resurrects him to kill, Jason Voorhees is one of horror’s most iconic slashers. Known for his hockey mask and giant machete, no-one in Camp Crystal Lake is safe from this madman (except if you’re in space, but let’s pretend that Jason X never happened!)

He’s pretty much unstoppable, able to endure pain and possess strength at a superhuman level, except if you drown him in water which is how he supposedly died as a child. While his movies are subpar, his crossover with Freddy Krueger is satisfying to watch if you’re a horror fan.

6, The Weeping Angels – Doctor Who

Give me a Dalek any time of day.

In this rebooted format for Doctor Who, the Weeping Angels are a standout from the rest of the Doctor’s enemies. Hiding in plain sight, they don’t move when you see them, because they only move when you can’t. Once they get you, they put you in another time period and let you age yourselves to death, in what can be described as a game of Grandmother’s Footsteps gone to hell.

Voted as the scariest Doctor Who enemies over the Daleks, Cybermen and the Silence, the Weeping Angels are monsters that force you to watch them in anticipation. Because if you turn away, or even blink. you’re dead. If you think jumpscares are cheap, wait till you see these things in action.

One, two, Freddy’s coming for you…

Those who know about Freddy will know of this rhyme as his calling card, or a bad choice for a bedtime story. First appearing in Wes Craven’s A Nightmare On Elm Street (1984), Krueger is a child murderer who preys on them at their most vulnerable time of day, when they’re sleeping. He packs a special glove with knives for fingers, a terrible red and green jumper, charred skin, sadistic one-liners, and an infinite amount of ways he can kill you.

Freddy is truly a remarkable creation, one of the best slashers in history and one to play on your mind. Just don’t watch it before you go to bed though…

4, It/Pennywise the Dancing Clown – It

This is one of Stephen King’s most iconic creations. Fear is in the eye of the beholder, and It can embody anyone’s greatest fears from a leper to a fridge full of leeches (just forget the giant metal bird-thing in the book), because its true form will drive the viewer insane once seen, so the mind can see only what it allows.

It feeds on the children of Derry every twenty seven years, preferring to masquerade as a clown to attract its prey. Roughly as old as time, it has never been completely defeated. But once it is repelled by the Loser’s Club in the late 1950’s, It comes back with a vengeance for round two. But even after that, it is still hinted as being alive in Dreamcatcher. So what can you do against an omnipotent foe? Well, don’t live in Derry for one.

3, Hannibal Lecter – The Silence of the Lambs

Forget killer statues, hockey masks and killer clowns for a second, because Dr. Hannibal ‘the Cannibal’ Lecter proves that terror is most effective in human form.

Arguable the best performance of Sir Anthony Hopkins’ career, Hannibal Lecter is a psychological nightmare, a cannibalistic serial killer who aids FBI agent Clarice Starling in finding ‘Buffalo Bill’. A brilliant and disturbing presence throughout The Silence of the Lambs, Hannibal Lecter is a name that provokes sheer dread when it is spoken. He puts a whole new meaning on ‘having an old friend for dinner.’

I mean, you had to know this was coming for Halloween alone, right?

With his un-killable nature and silent persona, Michael Myers was the OG bogeyman. He isn’t camp like Freddy, a mama’s boy like Jason, or ridiculous like Chucky, but a basic, yet effective serial killer with no traces of humanity left in him.

Very little is known about this character, which adds to the potential he has to unsettle you. If horror is fear of the unknown, then this bogeyman with the face of William Shatner (look it up!) is the definition of horror itself. If not, then pure evil it is.

Ahh, the serial killer who started it all.

If Michael Myers is the OG bogeyman, then Norman Bates is the OG slasher full stop. The caretaker of Bates Motel, Bates is a tortured soul who worships his mother, dressing up as her to commit murder. The way Alfred Hitchcock, the Master of Suspense, brought Bates into a story which could have easily been a crime story with the stolen jewellery and Janet Leigh’s character on the run, was iconic. The man came out of nowhere to murder her in what is the most iconic death scene in history: the shower scene.

It’s hard to see the horror genre without Norman Bates amongst the spectrum. He is simply the grandaddy of all slashers. So while it would have been apt to put Michael Myers at the top of this list, it’s impossible to ignore the legacy of this character.

Do you agree with my list? Were there any characters you feel deserved an honourable mention? Let me know in the comments below!

This site uses Akismet to reduce spam. Learn how your comment data is processed.